On Tuesday 12th April we noticed we had some visitors in our classroom - 11 round shiny eggs! What could be inside?

Late on Tuesday and early on Wednesday we noticed some cracks had appeared in some of the eggs! How exciting!

After school on Wednesday, Mrs Cross was so excited to find that one of the chicks had hatched. She ran to find Miss Crane to share the exciting news.

Miss Crane, Mrs Cross, Mrs Breeze and Mrs Collins all noticed that another egg had many cracks in it. The staff sat together to watch the second chick hatch from its' egg - it took its' time!

Just before Miss Crane was about to go home, we noticed that our third chick had hatched!

We hope that some chicks are still nice and comfy inside their eggs so that the children are able to witness the hatching process on Thursday.

When Miss Crane arrived at school this morning she noticed that seven chicks had hatched.  During the afternoon the children heard some cheeping and noticed that one chick was beginning to hatch from its egg.  We all ran to the table to watch.

Miss Crane transferred three of our most fluffy chicks to their bigger home and they have started to eat chick food and are excitedly waiting for the other chicks to join them.

After school our ninth chick hatched.  We still have one egg with cracks in - we hope it will have hatched when we get to school tomorrow!

We are sad to inform you that our tenth chick did not hatch and nine chicks were successful :-) We enjoyed watching all of the chicks in their new home today - They seem to have settled very quickly and are very happy in their new environment.

The chicks will now go on a short weekend holiday to Miss Crane's house, in order for her to look after them more closely and ensure they have all the food and water that they need.

The chicks really enjoyed their weekend at Miss Crane's house. She found that they were beginning to be very messy and needed to be cleaned a lot! Some of Miss Crane's family members were so excited to see the nine fluffy chicks when they visited.

The nine chicks were very much looking forward to coming back to Holy Family today after their mini-break away! They couldn't wait to see the lovely 28 Reception children and wanted to show off how much they have grown and how strong they have become.

The children are very much looking forward to being able to handle them this week, and help with the cleaning and filling of the food and water. 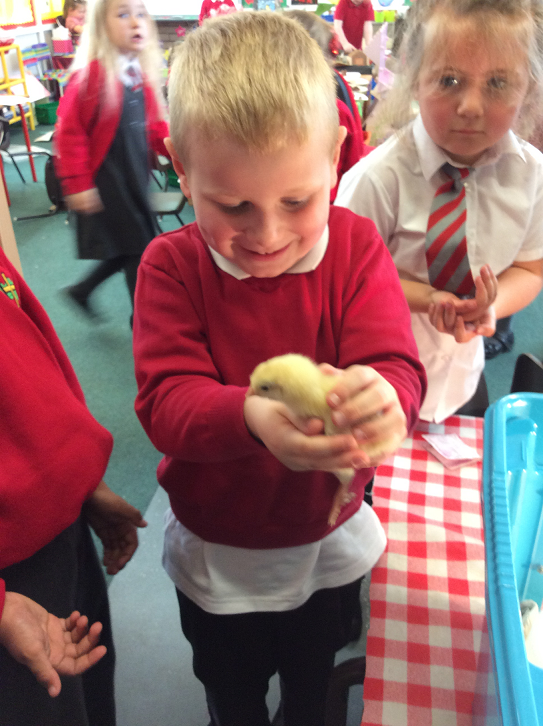